Wiltshire’s Middleton Cup team will now face Leicestershire, the county that they defeated in 1986 to win the title, in the semi-final of the National Inter County competition, which will be held at Worthing on Saturday 25th August.

The Moonrakers produced an excellent team performance in the 7 shot victory against Berkshire at Oxford last Saturday and will now be hoping to go one step further than they did in 1998 and 2003, by reaching only their second ever final.

After losing to Berkshire last year, at the same stage, the team were completely focused and determined to perform well and qualify for the National Finals. Unlike last year Wiltshire made a good start against Berkshire at Oxford and led throughout across the board. But it did get extremely tight towards the end as Berkshire fought hit back to cut the deficit at one stage to only two shots. 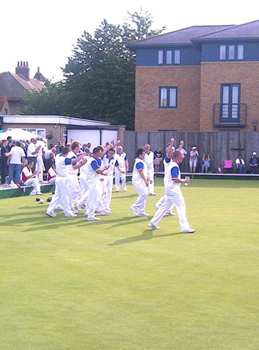 The Wiltshire guys made a solid start to the game and maintained a comfortable lead throughout the majority of the game, leading 26-17 at five ends, 54-40 at 10 and were 17 shots up as they had moved 86-69 clear at 15. However a late surge from the Berkshire team saw the lead drop to 11 shots at 18 ends and then drop to 2 shots across the board at 20 ends.

A big final push saw Wiltshire pick up seven shots on four of the six rinks on the last end and only concede two to claim a great win.

Wiltshire eventually only took the honours on two of the six rinks, despite not being behind on any of them at the halfway mark, but the determination and character shown by the players was brilliant and helped pull the team over the finish line with their noses in front.

Mike Jackson’s rink was pivotal in the overall victory recording a big 14-shot success while Neil Smith, extracted revenge for his defeat last year, by skipping his rink to a four-shot win. Heroics from Wiltshire skips Neil Smith and Mel Biggs in the closing stages, proved crucial and sealed an inspired performance from the team.

Delighted Wiltshire team manager Dave Snell said: “What a game, and what a great result.

“It was another great team performance played with the same spirit that has been with us all season and although Berkshire won 20 out of the last 30 ends the guys held their nerve.”

“I’m really proud of the squad especially as we had to make changes almost every game with no complaints from the players at all and they should hold their heads up high.”