On Sunday 8th June a BW Mixed team of 6 Rinks traveled to the far South West corner of Wiltshire where the lovely parish of Mere is situated. Some members of the team had a scenic ride before arriving owing to a failure in their navigation system !

The fixture was arranged to celebrate the 50th Anniversary of the formation of Mere BC  which apparently began as 2 rinks and a shed !! The facilities have now dramatically improved since that time with the very recent addition of the new changing rooms which are featured in another article on this site. The green now has 6 rinks and, yes , there is still a shed for the kit.

Once all were assembled there were photographs taken to record the occasion and the Vice President welcomed everyone to the afternoon’s celebrations before the rinks were announced and the game commenced.

The game was played with sometimes noisy enthusiasm and much banter between rinks and the result was a win for BW by 118 shots to 104. Top Rink for BW was skipped by Martin Salter with Iris Gardiner, Dave Galpin & Joyce Little.

Following the game there was a very welcome meal provided by the hard working team in the kitchen and liquid refreshment was provided by an equally hard working bar person. There were speeches and a raffle before everyone left for home after a really excellent afternoon which was a very fitting way to celebrate such a special Anniversary.

Thank you Mere BC for a lovely afternoon. 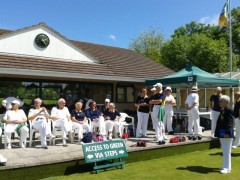 Relaxing before the game 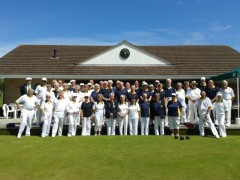 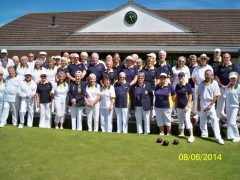 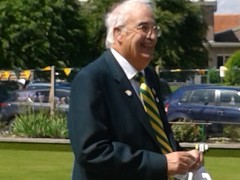 Welcome to Mere BC 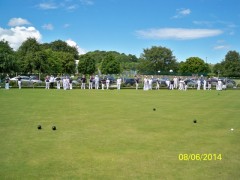 The game in progress 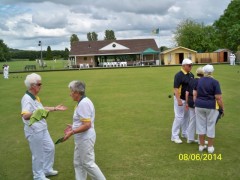 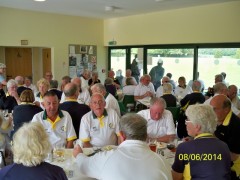 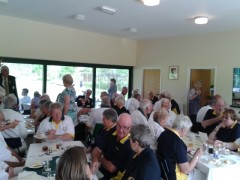 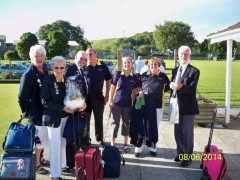