The Bowls Wiltshire Finals Weekend has been a busy time for Wayne Simmonds from Holt BC. He had only just finished a very busy fortnight at Leamington playing in the Fours, Triples, Pairs and Singles National Finals and this was followed by a full schedule at Devizes BC to determine whether he could become a County Champion four times over. 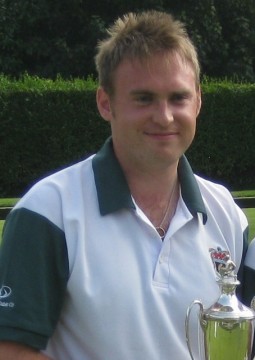 The weekend started well with a win along with team mates Justin Davis, Wayne Snook and Ben Gadd  from Holt in the Fours, followed by a very close match against the National Champions, Andy Colebrooke, Russell Francis & Graham Shadwell from Spencer Moulton. The score was level at 15 ends but a 3 and a 1 to go 18-14 up into the last end was enough to secure the win 18-15.

Wayne then finished the day off with a win in the BW Secretary & Treasurer’s Competition, partnered by Gary Potton.

Back at Devizes on Sunday morning and Wayne was soon the holder of a third Championship title when he won his first County Singles title against the experienced Mel Biggs from Westlecot. He had a very brief break before returning to take on Mel again in the Pairs – this time with his partner Wayne Snook.The game was finely balanced at the halfway point but by the 17th end the 4th title was looking doubtful as Mel and his partner Mike Jackson were 6 shots up.However, at 20 ends it was all square at 19 – all and after a few more nervous minutes the 4th title was achieved in front of a delighted crowd of Holt BC supporters.

Wayne took a well earned breather before embarking on the sixth final of his epic weekend  – this time as part of the Holt Four Rink League team. Sadly it was not to be a clean sweep for Wayne or Holt BC as the Four Rink League title slipped from their grasp in the last few ends of the Final but Wayne finished up with 5 out of 6 and Holt BC with 6 out of 7 (they won the Tourist Trophy while Wayne was busy winning the Pairs !)