Congratulations to 15 Club members and 10 visiting participants who can now officially call themselves ‘Local Markers’ because they spent the day taking part in an EBUA Markers Course. The morning session took the form of a quiz which encouraged some lively debate about the Laws and procedures associated with the game of Bowls.

This was a fun way to learn/reaffirm the knowledge which is necessary when marking a Singles game. There was a break for coffee followed by more quiz questions until lunch when everyone tucked into a ham salad and apple pie with cream which had been prepared by President Rosemary and Rose Keen – thank you both !!

After the lunch break the action transferred to the green in the sunshine where a variety of game-like situations/heads were set up for discussion and practice.

This was a worthwhile and educational day which would benefit anyone who plays Bowls whether they ever actually mark a game or not. Indeed, we had one member who has actually only been on the green three times previously but the knowledge acquired will be invaluable as she progresses and develops into the game.

A big thank you to County Umpiring Co Ordinator Peter Stewart and his team of umpires who provided the tuition and to the Bowls Committee who arranged for the course to be held at Devizes. 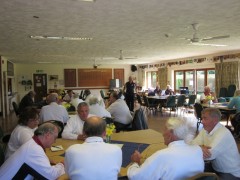 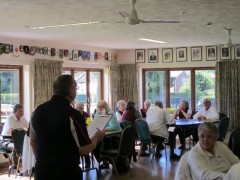 Out on the green

This is how you do it