On Tuesday May 12th BW Ladies played their first SWCL game of the 2015 Season. This was the annual visit to Topsham BC to play against Cornwall. This year the sun shone and the game was played in good conditions which obviously suited the Wiltshire team who put in a gritty performance to eventually emerge with a 17-5 win on points. Earlier in the afternoon things were not looking so good so it was encouraging to see a strong finish to clinch this victory. The score card gives the final result…. 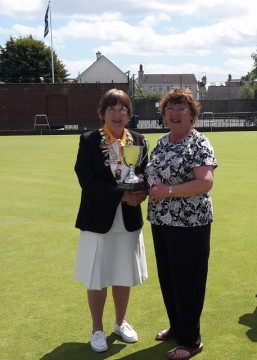 Before the game commenced Carol Horgan, Bowls Devon Administrator and ‘chief cook and bottle washer’ (her words!) at Topsham BC presented the SWCL Trophy to Cornwall as winners in 2014. The trophy was given by by Babs Barlow who was a past president of Devon and of England. She belonged to Exonia B.C. in Devon so this seemed to be an appropriate occasion on which to make this presentation.

After the game the two teams were served with an excellent meal by Carol and the team of helpers who worked so hard to make this a very pleasant occasion. Thanks must also go to the Greenkeeper and to the Umpire for the day.