It has to be mentioned that this game took place on President Richard’s birthday last Sunday.

The game was played in good spirit and the weather was good and the County won.  Richard was also presented with a glass engraved plaque for all the work for the amalgamation of the Wills Club and committee work that he had done over the years with the great support of Iris.

He also sent me a photo of him in his Birthday hat – which apparently he wore all afternoon. It would be a shame not to show you all!! 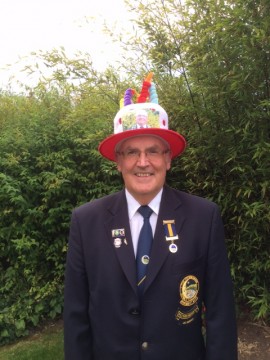