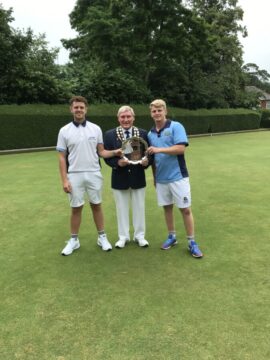 In the Men’s Under 25 Pairs Adam Bolwell (Spencer Moulton) and Connor Rabey (Avon) beat the Westlecot pair of Ben Choules and James Richman 16 – 13. Earlier in the day they had won their semi-final 16 – 9 against another Westlecot pairing of Nathan Richards and Jake Webster 16 – 9. Due to the number of entries Ben and James went straight to the final without playing a semi-final match.