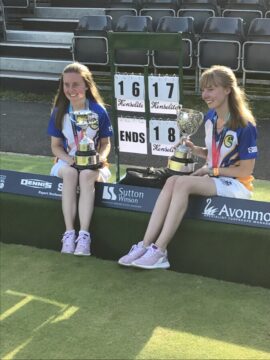 Sister’s Lucy and Katy Smith lifted the Women’s Pairs Trophy this afternoon following a scintillating final end that saw the Wiltshire duo overcome a three shot deficit and win 17-16. Experienced players Shamista Patel and Margaret Smith looked close to victory as they entered the last end, having secured six shots in the previous three ends to edge in front after a tight tussle early on.

The two leads finished in style, leaving the skips with an exceptionally close head. Surrey lead Shamista played three perfect bowls, leaving Margaret with two close seconds and a well placed back bowl. Katy, 24, also left her older sister in a promising position, with a front toucher and her other two bowls lying firmly in the head.

With six bowls left to play, Lucy had a shot on to turn the game around and a chance to secure the three to force an extra end. Having missed with her first bowl and edging one of Shamista’s bowls out of the head, Lucy opted to switch her hand and go for gold – hoping to turn out the remaining Surrey bowl and clinch an extra end or even the win. With no nerves appearing on the surface, the 26-year-old played it absolutely perfectly, turning out Shamista’s second bowl and managing to stay in the count to hold the winning four. After a tense deliberation, the Surrey player decided to play a runner on the backhand, narrowly missing turning out any of the four Wiltshire bowls, much to the delight of the Smith sister’s.

Katy and Lucy looked close to tears as they hugged in the centre of the green and took in what had just happened. Friends and family shortly ran on to the rink to join in the celebrations. They later walked on to the green hand-in-hand to collect the highly-coveted trophy.

Speaking after the trophies had been presented, Lucy described the win as being “what dreams are made of”. She said: “We are actually current indoor pairs champions too so to win this on top of it, I’m absolutely over the moon and to win with Katy as well is just the best feeling ever.”

Margaret and Shamista will be back on the greens later in the season, as Surrey looks to defend its title in the John’s trophy. The Sutton skip was lost for words after she left the green, devastated to have lost a national final by one shot. But Margaret was full of praise for the Smith sister’s and fully congratulated them on their win. She said: “It was a very good game played in very good spirit and it could have gone either way. We look forward to coming to play the John’s on the 12th September.”