Those who have not paid can go to Devizes and pay £1.50

on the day and play.

will be presented to the winner

at the County Luncheon

This is a FUND RAISING EVENT for the County

RAFFLE PRIZES would be appreciated

Please ensure your club gives their

Tea, coffee and cakes will be available to purchase.

On 18th Sep Bowls Wiltshire will be hosting a DBE, Disability Bowls England, event to showcase how clubs can support people to play bowls with a variety of impairments. DBE members will be showing their skills on the green at Devizes from 2pm.

To further support Clubs, BW will be hosting the Coach Bowls Inclusion Module which is described below:

“This 2 hour online module helps clubs, volunteers and coaches look at how they can make their club accessible to all bowlers, regardless of ability, mobility, disability, age and so on.

The module provides the information to help clubs recognise that any member may need some additional support or some adaptations at times, even through injury! It will help to highlight areas that a club can build on to help attract new bowlers and enhance existing members experiences.”

This module costs £25 per person and BW is offering a £10 Grant per person towards the costs which can be claimed after completing the course. To book on the course please follow the link below:

The course has been commissioned for the benefit of BW clubs primarily, however if there are spare places then these will be offered to other clubs outside Wiltshire, without the grants of course!

A Bowls Wiltshire mixed team of 10 rinks travelled to Devizes on 27th August for a match as part of the Devizes Centenary celebrations.

As usual fines were imposed and a very generous £80.13 was raised for the Wiltshire Air Ambulance.

BW Chair June thanked everyone for their support throughout the year.

As a final note all monies collected from the four 2017 BW Mixed games raised a very creditable £217.80 which has been forwarded on to the Wiltshire Air Ambulance Charity Appeal.

Once again thank you for your support and generosity.

Please see below for a link to the fixtures for the coming season.

The BW Charity Galas have been held for a number of years and have usually proved to be very popular. In recent years Swindon and Amesbury BCs have very kindly hosted the two events – one for the North and one for the South of the County.

This year the entries were very disappointing – only 9 clubs entered a team so, with the 2 enthusiastic Youth teams, this made a very awkward 11 entries – only 4 in the North area. However, Swindon BC very generously agreed to go ahead with the event despite the low numbers and the South area venue at Amesbury was organised with 7 teams in two sections and a creative draw to enable everyone to have the same amount of bowling.

The following accounts have been written by the two young bowlers who organised the Youth Teams so a big thank you to them both for their input – both as team Captains and as Reporters/photographers.

Gala Day at Amesbury BC Sunday 16 August
On Sunday some of the county’s southern clubs entered teams into the Wiltshire Gala held at Amesbury BC. The weather on the day couldn’t have been better with sunshine and warm spells and the atmosphere of players and spectators alike was one of merriment.
The Wiltshire Youth team was bulked out by the assistance of Thomas Bright from Devizes and Marian Menzies, one of the County Coaches, who came in last minute due to sudden and unfortunate drop-outs.
Wiltshire Youth started the day strongly against Blue Circle with the Pairs (played by Captain Tom Warner and his sister Bethan) winning 19-9, the Triples (played by Ashley Plumb, Nick Revell and Nick’s girlfriend Georgia) narrowly losing 13-10 and the Fours (played by Tom Bright, Marian Menzies, Ashley Peach and David Leighfield) won comfortably 16-2. So 8 points to 2 win with a plus 21 shot difference started the day brightly.
The second game went the Youth’s way again with the Pairs narrowly winning 16-13, the Triples only losing by one 7-8 and the Fours impressively winning 17-1. So another 8 points to 2 win with a further plus 18 shot difference to be added to our previous efforts.
After the lunch break the Youth played both Blue Circle and Downton again but for half games (due to the number of teams entered) where the Youth continued their successful start with two more wins. Against Blue Circle the Pairs won 13-4, the Triples won 10-6 and the Fours won 10-1. Against Downton the Pairs won 12-2, the Triples narrowly lost 7-8 and the Fours won again 10-2.
This meant with a clean sweep that the Wiltshire Youth made it to the Final where they faced last year’s finalists (and runner up to the Youth) Wilton – who similarly had taken a clean sweep in their section throughout the day.
The Final was a much tougher game with the Pairs narrowly losing 14-15 and the Triples drawing 9-9 but another spectacular display from the Fours saw them romp to victory with a 15-4 win, sealing the Trophy for a second consecutive win for the Wiltshire Youth setup.
Thanks go to Amesbury BC for the hospitality and to Bowls Wiltshire  for organising.
North Area – a report from Joanna Richman
The annual BW Gala Day was held at Swindon BC on Sunday 16th August, and we were all thankful that nice weather was in attendance! Due to the lack of response from Wiltshire clubs, there were only 4 teams entered this year – Purton, Highworth, Swindon and Wiltshire Youth North. After 3 games of 70 minutes, the overall winners were a team from Highworth, scoring 24 out of a possible 30 points, with an incredible shot difference of +43. Wiltshire Youth North followed closely behind in 2nd, with 18 points, losing 8-2 to Highworth in their last game.
My thanks go to the members of Swindon BC, Barry Wheeler and the County for all their help in making the day happen and run smoothly. A highly enjoyed day for all! 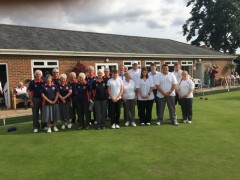 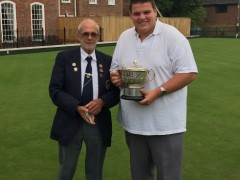 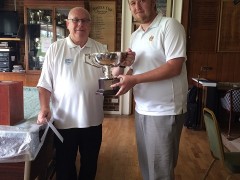 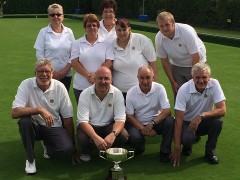 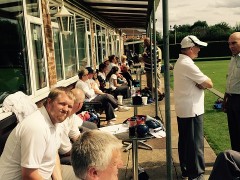 Relaxing between games at Swindon 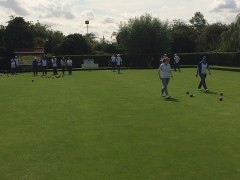 The games underway at Swindon 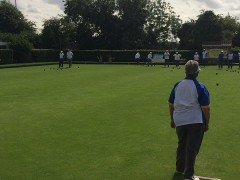 A big thank you to the members of both Swindon and Amesbury BCs for all the work involved in hosting the Galas again this year. A particular thank you to Barry Wheeler and John Menzies who ran the bowling on the day and to the catering and greens teams at both clubs.

You can read Richard’s report here

Last night – April 9th – the Bowls Wiltshire Management Meeting was very well attended, with 41 of the 49 clubs represented. The meeting included reports from the P&E Officers and some very useful information for Clubs which was supplied by Howard Pryse and Hedley Bowen, both of whom are heavily involved in work for Bowls England as well as for BW. Adie Lloyd – IPP for BE – commented that BW Clubs are very fortunate to have this first hand expertise available to them and asked that we all support them in their work. 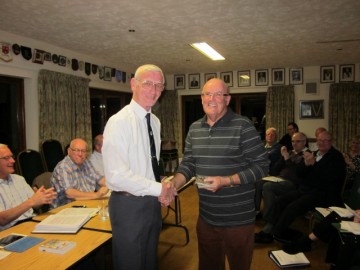 At the end of the Meeting the two BW Presidents received their medallions form Acting Chair, Roy Jones. June Corbett, BW Chair, had sent her very best wishes for the 2015 Season to the Presidents and all the bowlers of BW. Last year was good but let’s make this one even better!! 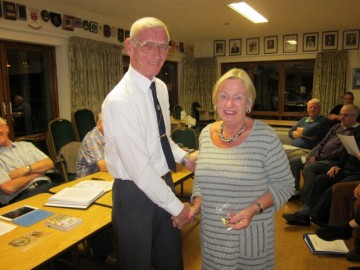 It seemed a bit like the end of term for the Roadshow Team today as we reached the fifth and final Roadshow to be held over the last two weekends. This time we were at Spencer Melksham BC and the room was relatively well filled with 9 Clubs represented. Again there was some lively discussion with some pertinent questions being raised and answered.

We are grateful to the Members of Spencer Melksham who provided hospitality and refreshments today. 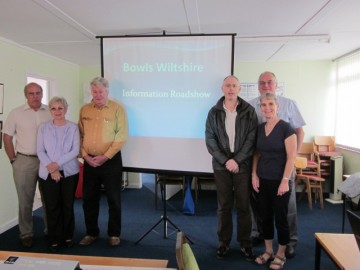 The Team at Spencer Melksham

There will be an information pack available – hopefully in time for a copy to be distributed to every club at the Management Meeting. We hope that those clubs who sent representatives to participate will send in their Feedback Forms to help us to plan future programs to inform Officers and Members of BW about the processes and services which are involved in the running of your organisation.

June Corbett, BW Chairperson, thanked the members of the Roadshow Team for giving up a great deal of time to plan, prepare and present this information in the interests of helping Club Officers with their work.