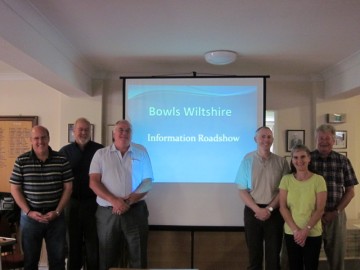 The weather was a little changeable but did not interfere with the play.

At Swindon there were 7 teams which meant that the Competition had to be played in two sections – one of 3 and one of 4 teams. What a pity all our efforts could not persuade another team to enter! The section of 3 was won convincingly by the BW Nomads – a team made up of various random BW Officers and other willing participants!! The section of 4 was won by Chippenham Town so these two teams competed in the Final which turned out to be a very close affair which was only settled on the final end in favour of BW Nomads with the Rink losing 8-11, the Triple winning 14-9 and the Pair 15-13 to make a total of 37-33.

The Cup and cheque were presented to BW Chairperson, June Corbett and the team decided to return half of their winnings to the BW Benevolent Funds for whom these Galas are played.

We are very grateful to Swindon BC for hosting this Gala and to all the hard working members – led by Barry Wheeler – who made the day so enjoyable while raising money for the Benevolent Funds.

We must also thank PEARCE FUNERAL SERVICES for their sponsorship of the Gala. 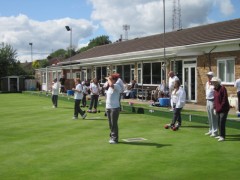 The games in progress 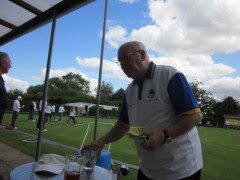 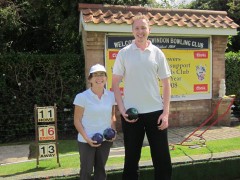 The long and the short of it!! 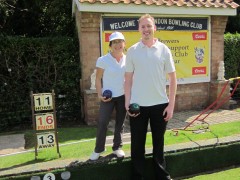 No Rachel…Tom is still taller!! 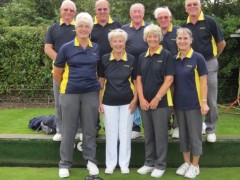 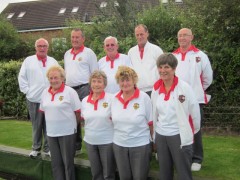 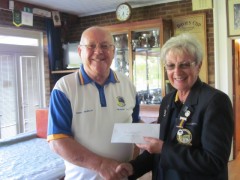 The cheque is presented 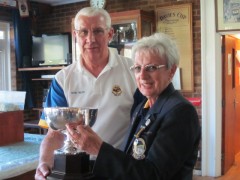 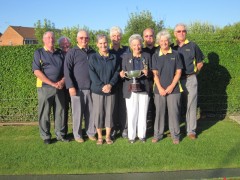 Meanwhile at the Amesbury venue play was also underway and this report is from John Menzies – thank you to John for running the event.
After some chasing around we finally had a full compliment for the Gala, Thank you to the people who agreed to play at the last minute .
We played in 2 sections as in previous years.
Section “A” was a clear win for Wilton with 28 points, their nearest rivals were Mere and Trowbridge Town with 12 points each with Downton on 8 points to complete the section
Section “B” was a much closer battle with Wiltshire Youth coming out on top with 18 points, Amesbury a close second 17 points followed by Devizes A 13 points and Blue Circle on 12
The Final, played between Wilton and Wiltshire Youth was all level at the whistle, with Wiltshire Youth coming out the Victors of the extra end.
Thank you to Amesbury BC for hosting the day again and also to “THE EYEWEAR OUTLET” of Salisbury for sponsoring the event. 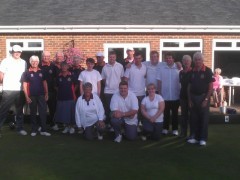 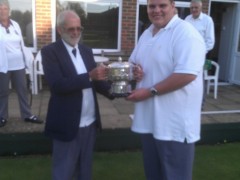 On Monday July 21st 23 Greenkeepers arrived at Devizes BC to take part in the annual Greenkeepers Competiton. Once again the weather was superb and the greens were bowling really well following the weekend thunderstorms.

The competition was played in excellent spirit throughout and the players who lost in their first game were given a chance to play in the Plate Competition – 2 wood – which had a bottle of whiskey (yes Irish!) as the prize.

In the main competition the two Semi Finals were between Gerry Tinson of Chippenham Park and Steve Rose of Rodbourne Cheney and Brian Whittingham and Brian Coles both of Wroughton.

The winners in two closely contested games were Gerry Tinson 11-5 and Brian Coles 10-9 and they will play in the BW Finals Weekend at Devizes BC on 6th/7th September.

The Final of the Plate Competition was between Colin Little of Devizes BC and John Ellis of Amesbury BC with Colin emerging as the winner 10-7.

We are extremely grateful to Devizes BC for hosting this event again – the members worked very hard to provide the excellent facilities and hospitality for a very enjoyable day. Thank you. 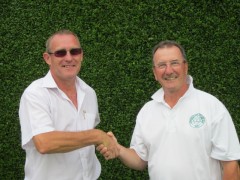 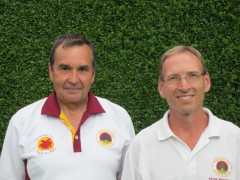 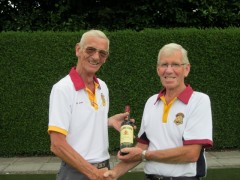 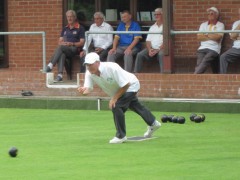 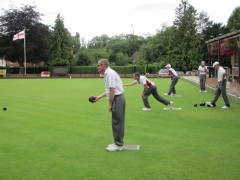 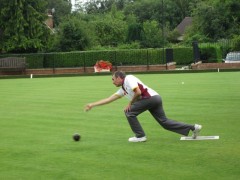 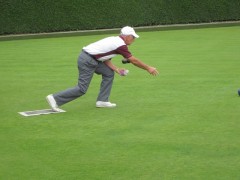 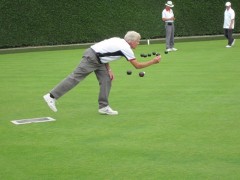 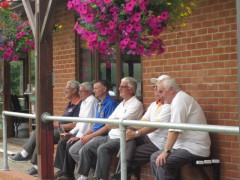 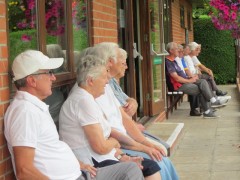 Engrossed in the game 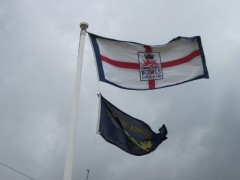 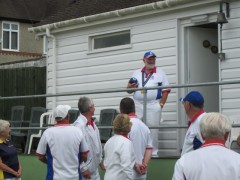 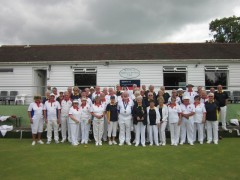 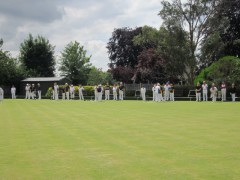 The Greenkeeper’s Competition is open to anyone, male or female, who regularly works on the Club greens or surrounds. It is a Singles Competition played over 14 ends in the initial stages and then 21 ends in the Final which will be played at Devizes BC during the BW Finals Weekend – 6th/7th Sept.

The BW Charity Galas are held annually to raise money equally for the two BW Benevolent Funds. Entry is open to all Bowls Wiltshire Clubs and it would be great to see an increase in the number of clubs represented in 2014. The Competition is divided between two venues and is played on a round robin basis to produce a winner at each venue. Prize money is awarded to the winners and runners up and the recently refurbished trophies will again be presented. Please consider entering a team this year – it is a great day out – lunch is available at both venues – and we will raise some money for the Benevolent Funds while we are enjoying ourselves !

For the second time the BWM Finals, the BW Mixed Finals and the BWL Domestic Finals were all held on the two greens at Devizes BC. The greens were handed over to BW Chairperson, June Corbett, by President Rosemary of Devizes BC and the Presidents of BW Men and BW Ladies – Roy Jones and Margaret Annetts – were on hand to present the trophies and congratulate the Winners and Runners up on the green at the end of the games.

The weather was kind – if a little chilly on the Sunday! The greens were in superb condition and the refreshment team were kept busy all weekend. There was some excellent bowling and some really close matches.

The results are posted here, with a picture gallery here.