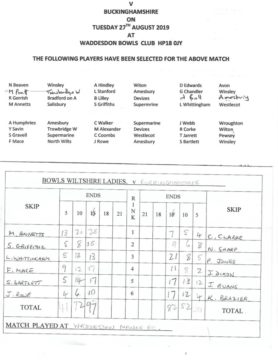 Recent results of matches played by BW Men and BW Ladies are as follows:

Saturday 29 June:- BW Men lost 68-119 against Bowls Hampshire in a BW Men’s Presidential Game played at Old Basing BC. BW Men lost on five out of the six rinks, with the only winning rink coming out on top by just three shots.

Wednesday 17 July:- BW Men narrowly lost out 110-121 against Royal County of Berkshire in a further BW Men’s Presidential Game played at Wantage BC. BW Men won on three out of the six rinks but just missed out on the overall result.

Tuesday 9 July:- BW Ladies won by the narrowest of margins 106-103 against Bowls Hampshire played at Alderbury BC. BWL won on three of the rinks and a great 24-8 win by Margaret Annett’s rink saw the result swing in BWL’s favour.

Wednesday 10 July:- BW Ladies kept up their winning form with a 116-101 victory over Herefordshire in the South West Counties League. BWL won on three rinks and drew on one rink which saw them take the overall match on points and shots.