The original location for the famous ‘Wiltshire Moonraker’ legend has been fiercely debated over the years by several local villages. Its most likely location however, is still believed to be the Crammer pond in Devizes, which was formerly part of the parish of Bishops Cannings. 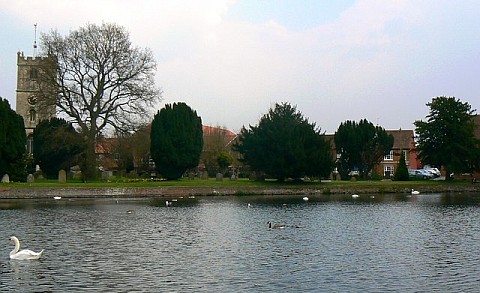 The Crammer pond in Devizes

The story goes, that in 1791, a group of smugglers based in Wiltshire had hidden contraband brandy in the Crammer pond. Their presence at the Crammer one particular moonlit night had drawn the attention of a team of excise men who had been tipped off that something untoward was going on at the Crammer. Taking cover nearby, the excise men waited patiently for their quarry. In due course the smugglers arrived and began pawing at the surface of the pond with what appeared to be rakes. Unknown to the excise men, the smugglers had also been tipped off and had hatched a cunning plan.

Seeing enough and with their suspicions aroused, the excise men broke cover and quickly confronted the smugglers enquiring as to their business. The smugglers played dumb and said they were from Bishops Cannings and were “raking out that gurt yaller cheese in yonder pond”. Briefly translated means, “we are trying to get that great yellow cheese out of the pond”.

Hearing their explanation, the excise men believed these rogues as simpletons from the village of Bishops Cannings (a village that had acquired a reputation for more then its fair share of fools over the years and had become the butt of many jokes) so were inclined to believed their ridiculous story. Satisfied they had just encountered several fools attempting to rake in a reflection of the moon on the pond thinking it were a giant cheese, they rode off. Little did they know, that the ‘village idiots’ had just had the last laugh. 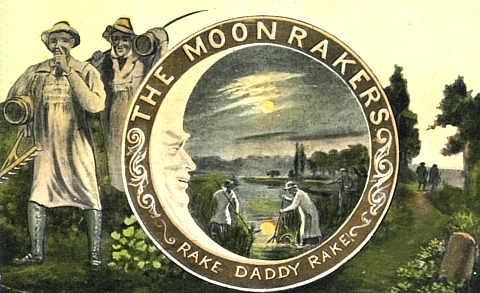