Wiltshire Ladies will be facing Herefordshire on Sunday in the regional semi-final of the Walker Cup. If successful, they will then face either Dorset or Worcestershire in the final for a place at the Ladies National Finals at Royal Leamington Spa on August 12th.

The Ladies have had a good run in the competition so far, after fantastic wins against Cornwall (47-22) in the preliminary round and then against neighbours Somerset (42-35) on home turf at Box. 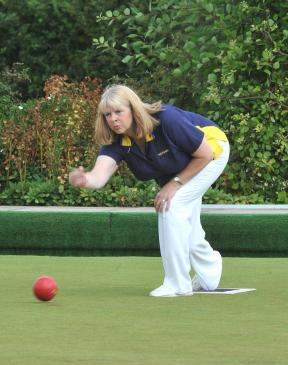 Wiltshire won on both rinks, which were skipped by Box players Alex Jacobs (pictured right) and Carol Grenfell. Both rinks were quite closely matched early on, with Grenfell’s rink 9-6 up at 10 ends but 11-13 down at 15, however a strong performance over the next 3 ends saw them pick up 7 shots to then  lead 18-13 at 18 ends and then finally complete a 6 shot win after 21 ends by 20-14. Jacobs’ rink made a slow start to their game and were trailing by 7 shots after 5 ends, and although  after recovering well to lead 17-14 at 15 ends, were again pulled back and level 18-18 after 18 ends. The crucial last stages of the game however, saw both rinks keep things tight and while Grenfell’s rink pulled out a 6 shot margin, Jacobs’ rink were also able to edge in front and win 22-21, to secure the overall victory, which meant qualification to the regional finals.

The Wiltshire selectors have named an unchanged team for the Herefordshire game, which will take place at Taunton B.C (Vivary Park) on Sunday 15th July at 10.00am.

Any extra support for the Ladies in this important match would be greatly appreciated.