On Monday 22nd July 23 men and 1 lady played in the Greenkeepers Competition at Devizes BC. It was a very hot day and the greens were running fast but there were some very close games leading to one semi-final between Geoff Toomer from Wilton and Roy Carter from Rodbourne Cheyney in which Geoff was never behind and won by 15 shots to 9 and the other between defending Champion Kevin Carter from Highworth and Steve Rose – also from Rodbourne Cheyney. This proved to be a ‘game of two halves’ with Kevin finding himself 2-7 at 7 ends. However, over the next 7 ends he turned the score around and came out the winner 10-9. So the Final will be between Kevin Carter and Geoff Toomer at BW Finals Weekend on 7th/8th Sept at Devizes BC.

In the Plate Competition which was run as a 2 wood event alongside the main draw for those who lost their first round games the Final was between Colin Little from Devizes and Les Cousins from Downton with Les eventually going home with the spoils (a bottle of whisky!)

Our grateful thanks to Devizes BC for hosting this competition and for the hospitality afforded to all who attended. 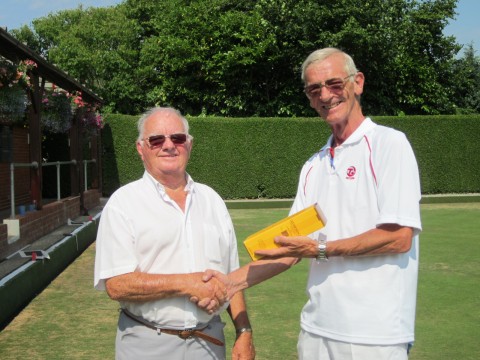