It was a perfect day, cold early on but then sunshine all day, which drew out large numbers of people from the surrounding area. It was estimated that up to 20 thousand were there by early afternoon and there was a lot of interest in the Bowling Club Stand. This included a prepared grass rink where newcomers could try their hand at getting near a target. During the course of the day about 130 adults and children took part. The photograph shows one of the potential bowlers Harry Brenan trying his hand. 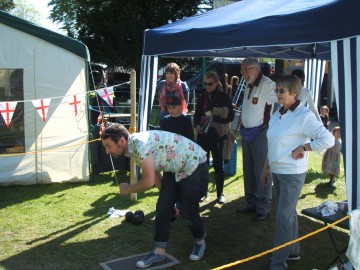 At their headquarters, near the Leisure Centre on Wick Lane in Downton, the Club have held a “Play Bowls 4 Fun Day” on 4th May and will hold another on 11th May and on Tuesday afternoons on 13th and 20th May. At these two Tuesday sessions it is hoped that pupils from the nearby Trafalgar School maybe attracted to try the game. Several other students from the school have come down to play in the past and have kept their interest in the Game.

Further details can be obtained from the club’s website www.downtonbc.co.uk