On Sunday June 1st a BW Mixed side of 6 Rinks played against the Salisbury & District BA at Downton BC. The sun shone for a change and a very enjoyable afternoon was had by everyone who took part. There was a sociable and competitive atmosphere across the green with plenty of good – hearted banter between the players. The result was a win on 3 rinks for each side but on shots it was a win for Salisbury & District by 123 to 97. The Top Rink for BW was skipped by Martin Salter with Marian Menzies, Sid Corbett & Don French.

Our thanks to Downton BC for their hospitality and the excellent meal after the game. 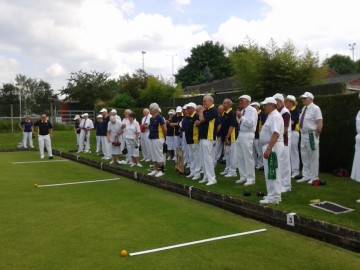 Both teams ready for the game