The BW Green Keepers Competition was held at Devizes BC on Monday 13th July. The weather was not particularly kind but, as was pointed out, Green keepers are hardy souls and used to being out in all weathers! There were 25 entrants and they were all able to play 2 games because those who lost their first game in the main competition were entered into the plate competition (no plate actually involved – a bottle of single malt whisky was at stake!)

The two semi finals of the main event were both close, hard-fought games with the eventual Finalists being John Ellis from Amesbury BC and Steve Cornish from Rodbourne Cheney BC. They will play the Final at the BW Finals Weekend – 5th/6th Sept at Devizes BC.

In the Plate Competition the final was between Paul Black from Blue Circle BC and Geoff Warr from Downton BC with Paul claiming the whisky at the end.

This was a sociable and successful day with a very welcome meal of ham, egg and chips at lunchtime. A big thank you to Devizes BC for hosting this event and for providing their usual excellent hospitality. A particular thank you to the catering team and the greens guys – who set up all the kit as well. A very special mention to the Club members who came up trumps by agreeing to mark – some of them at the 11th hour !! 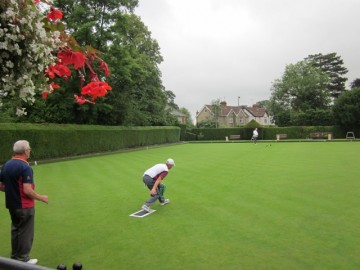 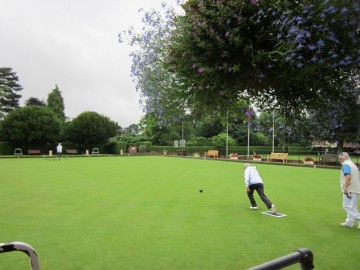 Steve Cornish in his Semi Final 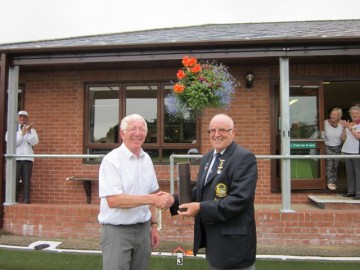 Paul Black receives the prize for the Plate Competition from BW Men President – BWL President Joyce Little and Devizes BC President Rosemary Bradbury in the background !