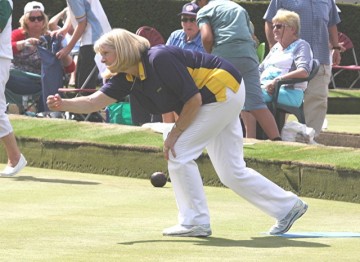 Alex in the early rounds on Saturday 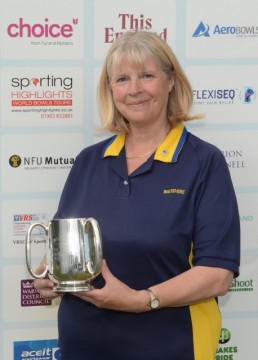 Alex with the trophy

ALEX JACOBS has become Wiltshire’s first winner this year at the 2015 Bowls England national championship being staged at Royal Leamington Spa this month.

The Box player clinched the Over 55s singles crown on Sunday afternoon when she beat Bolton’s Eleanor Benvie 21-15 in the final to retain the ladies senior singles crown that she won for the first time last August with a very comfortable 21-9 victory over Gloucestershire’s Sue Latham.

Similar to last year at Leamington, Jacobs, 59, from Chapel Plaister, was in blistering form all weekend at Bowls England Headquarters.

In the final against Lancashire’s Benvie (Bolton), the Box star player was always ahead racing into an 8-0 lead at five ends. She was then hauled back to 10-9 at 12 ends but pulled away again to 19-12 at 18.

Despite pulling in a single on the next to lead 20-12 she had to wait three more ends before finally clinching the match 21-15 and retaining her senior singles title.

“I am absolutely delighted to win the senior singles for the second year on the trot,” said a jubilant Jacobs. “To defend a title is very special, not many achieve that.

“My form was good throughout last year and I played well in all my games but this year was a lot tougher and I had to certainly work much hard in all my games.

“The best win I suppose was in the final as it was special but I had to come from way back in my semi-final after a slow start.”

And Jacobs added: “I couldn’t believe the number of Wiltshire people at Leamington supporting me – it was very encouraging and good fun. They were there all weekend for the youngsters tournament that was being played on Saturday and Sunday which had I think 14 youngsters from the county playing which was great.”

Jacobs opened up the defence of her title on Saturday lunchtime with a 21-13 win over Pat Thornton (Dukeries, Rainworth, Notts) and followed that by defeating Derbyshire’s Elaine Haddon-Holmes (Silver Band, Long Eaton) 21-14 who she had eliminated on the way to last year’s title.

On Sunday Berkshire’s Pat Fowkes (Caversham) was the next player to fall to Jacobs going down in the quarter-finals 21-14.

In the semi-finals Jacobs made a slow start against Hampshire’s Pamela Lambshead (Cowplain, Havant) and trailed 6-1 after five ends.

In the final against Lancashire’s Benvie defending champion Jacobs was always ahead and successfully retained her senior singles crown with a 21-15 victory.

Apart from 2014, Jacobs previously at the national championships at Leamington had finished as a runner-up with her mum Judy Selbie in the Mother and Daughter competition in 1999, and was a losing semi-finalist in 2009 in the two wood national singles and in the 2013 national pairs with her usual partner Sue Cooke before lifting the Over 55s singles last year and completing the double this weekend.

Jacobs, however, is not the first Box or Wiltshire player to win the Over 55 singles crown as Janet Hardie took the senior singles title in 2007 while Wendy Anderson (Stratton Churchway), a beaten finalist in 2004, won it the following year when a member of Rodbourne Cheney.