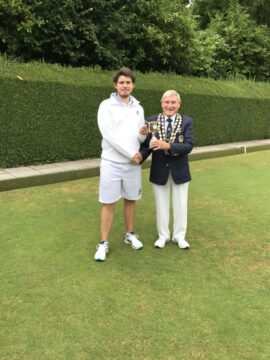 BW Men today played out the Men’s National Championship 2 Wood Singles from the Last 16 finishing with the Final between holder Wayne Snook (Holt) and Kyle Anderson of (Royal Wootton Bassett). Devizes BC hosted the event and supplied five of the markers. To reach the final Wayne played Russell Francis (Spencer Moulton) winning 15 – 11 before beating Mike Snell (Royal Wootton Bassett) 14 – 12 then taking on and beating Middleton Cup Manager Mike Jackson 16 – 7 in the semi final. Kyle started the day by defeating Mikey Titcombe (Westelcot) 17 – 12, in the quarter final he Scott Edwards (Westlecot) 15 – 13 before winning a close semi-final match 14 – 13 against Tom Warner (Salisbury). In the final Kyle got the better of Wayne to win the 2 Wood title 15 – 8. This was the first time that BW Men had tried this format and from the many favourable comments it will be played using the same format in 2022.