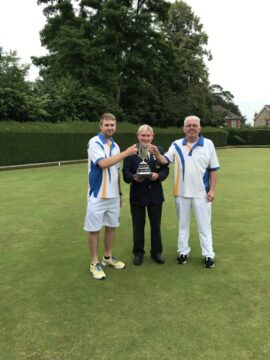 In the battle of Salisbury Graham House and Nick Revell came out on top against club colleagues Fraser Boynton and Tom Warner 12 – 10 in this afternoons Men’s National Pairs Final. In the semi final Graham & Nick beat the Royal Wootton Bassett pairing of Graham Hatherall & Neil Collett 21 – 11 with Fraser & Tom beating Paul Kistle & James Richman 17 – 16. Sadly only one Graham & Nick will represent the County at the National Finals at Leamington due to the changes made by Bowls England.