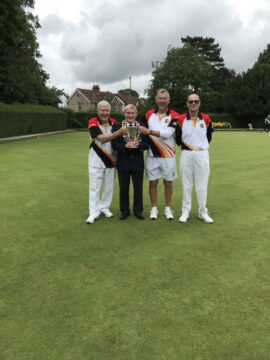 Rob Clews, Richard Gainey & Jeremy Haselton of Chippenham Town defeated Paul Kistle, Neil Smith & Scott Edwards in the Final of the National Championship Triples at Devizes BC this afternoon. In a close final they were 2 up after 14 end before going on to win 15 – 12. in the morning semi-finals Chippenham Town and beaten Spencer Moulton 16 – 13 as Westlecot were beating Royal Wootton Bassett 18 – 16.