Bowls Wiltshire would like to wish Tom a HAPPY 100th BIRTHDAY on CHRISTMAS DAY.

Congratulations on reaching this fantastic age and we hope you have a great day.

Tom was born in 1921 in the village of Imber (now used by the army in the middle of Salisbury Plain) before the family moved to Thingley near Corsham when he was eight months old.

Tom and his brother later owned a farm in Thingley where Tom looked after the cattle whilst his brother the arable side of the farm. Tom sadly lost his wife Betty many years ago.

Tom retired from farming 30 years ago and at this time took up bowling firstly with Melksham Town and when they closed he joined Box BC where he still bowls. During the winter months Tom can be found bowling indoors at North Wilts. 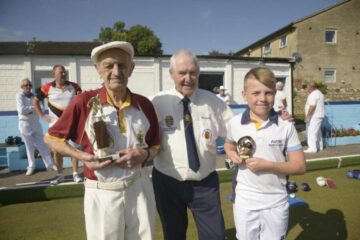 At this years Mid Wilts Gala Tom was the oldest player taking part and he  teamed up with Alfie Holland who was the youngest, the picture shows Tom and Alfie collecting trophies from the Mid-Wilts secretary Stan Bartlett.

Tom still enjoys his bowls and plays in leagues and runs a Tea & Biscuits team at Box where he diligently writes out all the teams playing schedules by hand for each member of his team.

After he retired from farming he moved to Gastard and then a few years ago into Corsham. So he is a Wiltshire Moonraker through and through.

He is a very valued member of Box BC and it is not unusual to play all afternoon before helping with the washing up.

The picture shows Tom at Box Revels helping out in the Box BC tent.